Civilization 6‘s next Frontier Pass DLC pack launches this week with the new Byzantium and Gaul civs. After previewing Byzantium’s Basil II leader a few days ago, Firaxis has lifted the veil on Gaul’s leader, Ambiorix, who historically led the Eburone tribe of Gallia Belgica against Caesar’s occupation in 54 BCE.

Gaul’s unique ability is Hallstatt Culture, which makes mines provide an adjacency bonus for all districts, a culture bonus, and culture bomb unowned territory. The downside is that specialty districts can no longer be built next to your city centre, and they can’t get adjacency bonuses from other districts. Ambiorix’s King of the Eburones ability grants you bonus culture based on the unit cost of each non-civilian you train, and gives melee, anti-cavalry, and ranged units a combat strength bonus for every fellow combat unit that’s adjacent.

The Gaesatae replaces the warrior as Gaul’s unique unit – more expensive, but it gets a combat strength bonus against stronger units and district defenses. The unique Oppidum district is cheaper and available earlier than the industrial zone it replaces, has its own ranged attack, gets extra adjacency bonuses from quarries and strategic resources, and gets you instant access to the apprenticeship technology when you construct it.

The new civ launches in the Gaul and Byzantium pack on September 24, adding yet more content to one of the best strategy games on PC. 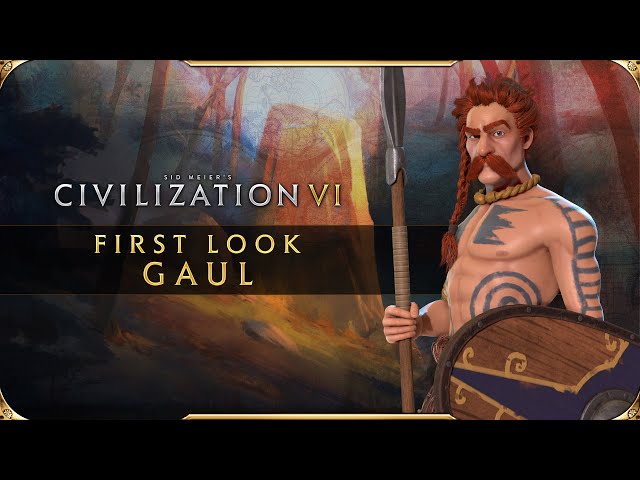 This new leader is pretty nasty. Mines are not an uncommon building and for them to culture bomb (ie, claim) unowned territory every time they’re built is nuts. The penalty for district adjacency bonuses and construction away from the city centre isn’t that big a deal if you’ve got enough space, and with these bonuses that won’t be a problem in theory – besides the territory from building mines, you get extra culture (which is how your borders expand naturally) both from them and from Ambiorix’s leader ability when you create units.

Since many units grant adjacency bonuses from Ambiorix’s ability, you’ll want to spam them anyway, and embrace a ‘horde’ style of conquest as the video suggests. Your biggest obstacles will be neighbours camping on all that land you want to claim, so be prepared to go to war early and often, and paying upkeep on such a large army. I would therefore invest in your economy and build commercial districts first and foremost – it’s great that your unique industrial district is available earlier, but since you’ll probably be playing aggressively at first its defensive qualities are unlikely to align with your priorities. Consider them when you’ve rolled over your first or second neighbour and are catching your breath ahead of your next war.