The third Night City Wire episode for Cyberpunk 2077 is out and it includes tons of information about the vast world Night City and its dangerous inhabitants.  Check out the new video showcasing the many gangs vying for dominance!

The biggest release of the year is closing in. On November 19th CD Projekt Red’s rundown vision of the near-future will launch on PC, PlayStation 4, and Xbox One. It’s arguably one of the most anticipated releases and will be the crown jewel for the current-gen.

With the third Night City Wire episode, the developer is focusing on the world of the open-world first-person action-RPG. Namely, the gangs of Night City. And there are plenty of them to keep track of.

From the netrunners of the Voodoo Boys to the augmented muscle men at the Animals, backcountry Aldecaldos to Asian Tyger Claws, nationalist 6th Street to Hispanic Valentinos, and last but not least outcast Moxes, these seven distinct gangs are in an ever-raging battle for supremacy over the city. Life in Night City is brutal and unforgiving and you’ll have to side with these gangs or confront them head-on to achieve your goals.

But that doesn’t mean it’s all doom and gloom in Cyberpunk 2077. Another new trailer was also shown titled ‘Postcards’ and it shows Night City from its best side. Namely, the broad variety of districts and regions where players will undoubtedly find a spot they find the homeliest.

While Cyberpunk 2077’s launch coincides with the start of next-gen – one week after the Xbox Series and the same day as PlayStation 5 – the game will launch as a current-gen title with next-gen ports slated to come out next year. Mind you, since the PS5 and Xbox Series are backward compatible, you’ll still be able to play it on the new systems, just not with any extras like ray-tracing.

Alongside game info, PC gamers now also have the official system requirements. You’ll need a beefy rig to play the game at 4K with all bells and whistles but the entry barrier is surprsingly low. Check them out here. 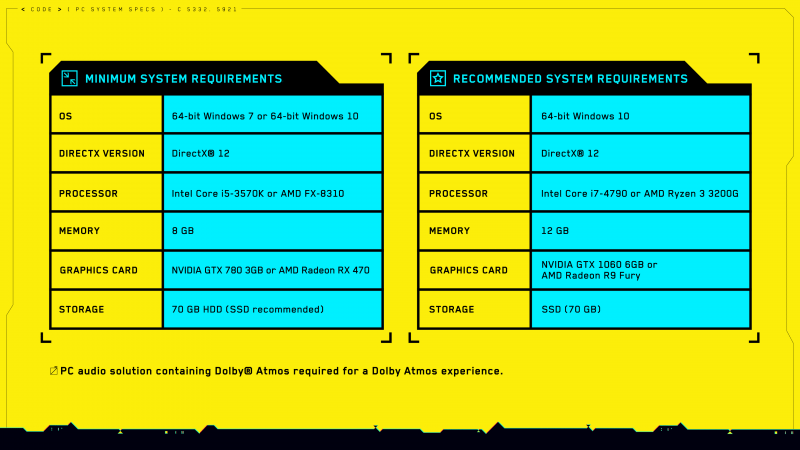