How to get Blazing Suns in every Hunter Trial in Horizon: Zero Dawn 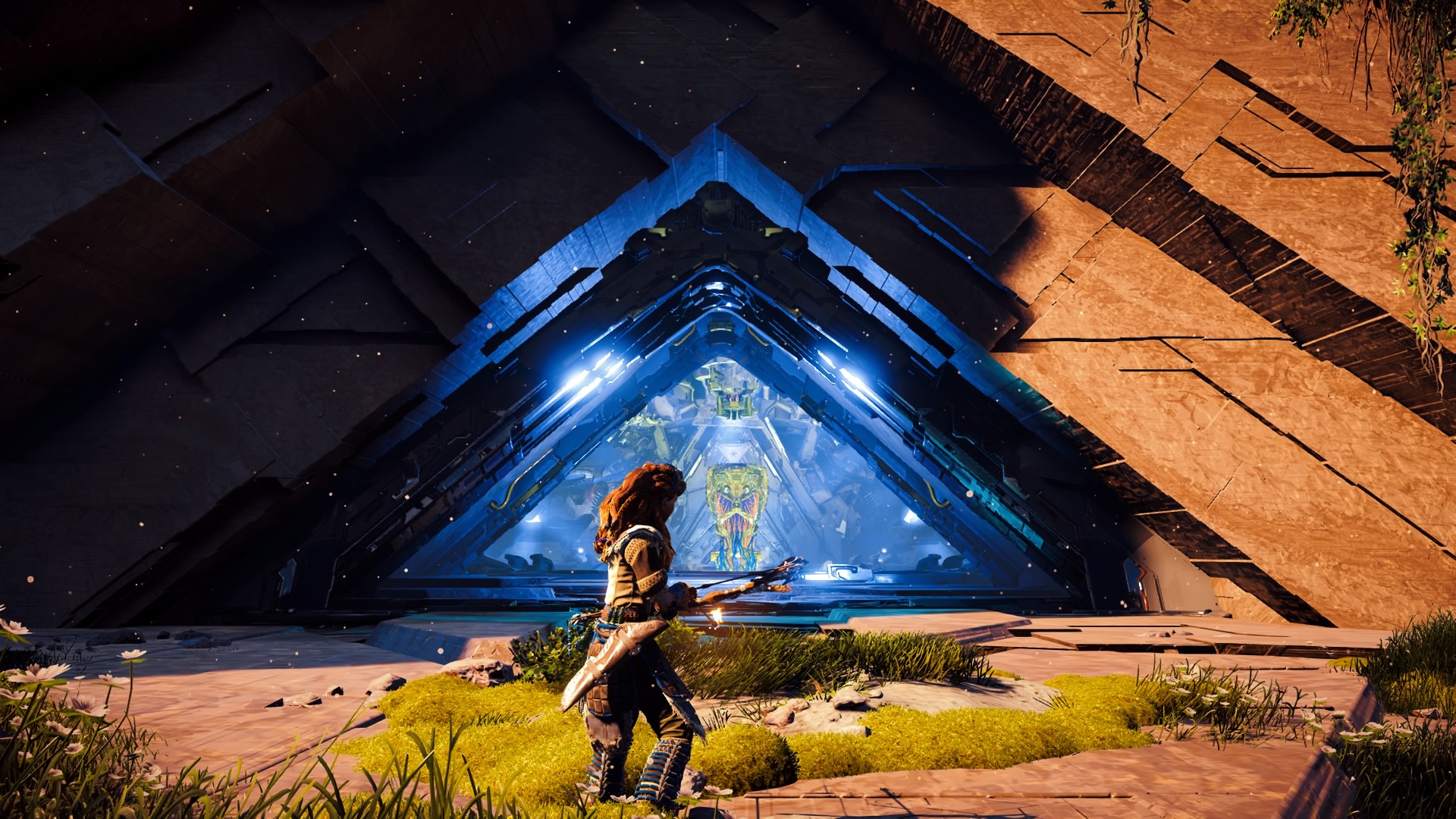 Hunter Trials are an optional part of Horizon: Zero Dawn, but they’re arguably the most important side quest in the game, as completing them unlocks Horizon’s best weapons. They also serve as a more advanced tutorial of how the game’s mechanics work in a controlled environment, and since they can be repeated, the harder ones are a good place to grab some quick XP. Actually completing them is fairly easy, as they have a 20 minute time limit. To get the highest reward though (Blazing Suns), you’ll need to complete them much faster; sometimes under a minute.

There are 15 trials in total, arranged into five groups of three. They have a suggested level, but some can be completed much earlier with some clever strategies. Likewise, to get the top speed in the lower level ones, you might need to play through the game a bit more to unlock a weapon that turns the tide.

By far, the easiest way to complete this trial is to have a Tearblaster. It’s a weapon designed to rip the outer shell off machines, and takes all the challenge out of this trial; just shoot a few clusters and the job’s done. When you unlock the Nora Trials though, you won’t have a Tearblaster. It’s possible to complete this with a decent bow and arrow with the Concentration skill, especially with the generous time limit, but be aware that the Tearblaster makes this ten times easier.

Logpile Trial – Kill machines with the Logpile Traps in the area (2:00)

Having two minutes for Blazing Sun is a huge help here, as the actual act only takes five seconds, but corralling the Grazers where you need them to be can take much longer. In theory, you need to sneak up behind the Grazers, bomb where you don’t want them to go, then run ahead of them to a log trap and fire an arrow. The Grazers are fast and hard to control though, so a good method is to lean into the chaos: chase the Grazers around randomly for 30 seconds or so until they’re all running everywhere. Then, wait by a nearby logpile and shoot it just as they run past.

Like the Trial above, corralling them is very difficult, but with some careful planning, you can make short work of it. Before you even go near the Grazers, head to the rope suspended over one of the paths with the logpile traps. You’ll need the Balanced Aim skill. Stand on the rope, and set (at least) six traps along the valley, making sure they stretch the whole way across. Once you’ve got enough traps set, use a combination of Bombs and running to lure the Grazers into place. With three minutes to do it, it’s not a big deal if they go the wrong way initially, but you can always hedge your bets by placing extra traps in other valleys too.

Despite the game’s description, what this trial needs you to do is damage four machines by shooting Strider canisters with fire arrows. To get this done in 40 seconds, you need to wait at the top until you can find a group of machines together. The Strider canisters explode when shot, and if a machine is damaged by the explosion, it counts as a hit for you. It’s fairly easy to get three machines with one explosion if you wait until they’re grouped, leaving you enough time to find a fourth to shoot.

Shock Trial – Stun Bellowbacks and Shoot Canisters off the Undersides (1:00)

As will increasingly become a theme here, the Tearblaster is a must for this. Before the Trial starts, scan for the closest Bellowback and bring up its path. Make sure you place the trap along this path, and either wait or lure it towards the trap. Once it falls, run behind it and Tearblaster the canisters until all three pop off; make sure you get all three, as that is what the Trial needs. Arrows work too but will take much longer.

There’s an important distinction here; you need to kill them while frozen, not through freezing. This means once you’ve shot an enemy with a freezing arrow, you should switch back to a more powerful one, or if they’re on lower health, hit them with Aloy’s lance instead. Aside from that, the best advice is to target Striders, go for unaware machines rather than ones fleeing, and avoid the Bellowbacks. You can freeze and kill the Fire Bellowback and still do it in time with Striders making up the rest, but you won’t be able to with the Ice Bellowback, and the Striders can be killed much quicker anyway.

With Silent Strike and a good stealth armor, this one shouldn’t give you too much trouble. Tag and bring up the paths of a few Watchers from the top, and head down whichever rope has the largest cluster. Drop off the rope into long grass, crouch, and head towards a Watcher’s path. Stay stealthy throughout and you’ll find four easily enough once they’re tagged.

There are two Stalkers you have to kill here, and both are surrounded by three red proximity mines, so it’s almost impossible to Silent Strike them. Almost. If you wait nearby, you’ll see the Stalker prowling. Once it’s close to the edge, you can advance on it quickly and get a Silent Strike in just as the mine goes off. Trying to just attack them outright will turn the Stalkers invisible, cause more machines to attack, and generally takes too much time.

Because of the short time limit, element of chance involved, and the fact the crates can be destroyed, this Trial is arguably the most difficult in the game, despite being low level and featuring weaker machines. There are two clusters of crates; one by the middle rope, and one by the right rope. You can’t see them from the peak, which means you won’t know until you’ve started if the crates are on the ground or currently being used by a Shellwalker. If they’re on the ground, you need to sneak up and quickly loot them before moving on to the next site; this is much easier and to hit 1:05 you need at least one site to go like that. If they’re on the Shellwalker, you need to Tearblaster them off and run up to loot them. Make sure you aim for the claw holding them in, rather than the crate themselves though, or you might destroy the crates. Once you Tearblaster them, get ready for a fight too. Try to loot and run, as you don’t have enough time to kill many machines here.

Similar to the Shock Trial, the actual aim here is to use the Tearblaster on the machine’s underside, only it’s two Tramplers instead of one Bellowback and a Ropecaster instead of a Trip Wire. Tag both Tramplers before the Trial starts, then head down the nearest rope; that’s usually the central one. Fire three or four Ropecaster bolts at the first Trampler to tie it down, then head around the back and use the Tearblaster. The second one will probably spot you and begin to charge, so quickly switch back to the Ropecaster and repeat the process.

You don’t need to kill any Glinthawks here, just shoot them out of the sky. Things can get a bit hectic when it comes to finding three corpses in the heat of battle, so a good strategy is to run to any corpse near you when you land from the central rope, then for the second and third corpse, hit the raised stone columns. Fire a couple of arrows on your way over, then a couple more once you reach the top. It’ll take two or three arrows to get the Glinthawk to drop the a Watcher, and it’s more efficient to hit three Watchers near each other, but you can still clear the time limit with the column method, and it saves you having to search, limiting the chances of the Glinthawks flying away.

Before the trial starts, scan and find the flight path of one Glinthawk. Pick a rope that heads nearest this route, then begin the Trial from here. Once you land, shoot the Ropecaster at the Glinthawk. Any chance of stealth goes out the window here, but that actually works in your favor. When they’re attacking, the Glinthawks will hover rather than fly, making them easier to hit. As best you can, ignore the ground machines and concentrate on pulling two more birds out of the sky, and remember that it’ll take a few ropes to do it.

Ravagers Vs. Machines Trial – Remove and use a Ravager cannon to kill Machines (1:10)

The Tearblaster is required for this one. Use the middle rope to land near one of the Ravagers. Tearblaster the cannon off, then kill the Ravager; killing isn’t needed to pass, but makes the next part easier. The obvious machine is the Thunderjaw in the canyon, but that takes too long to kill. There should be two or three Watchers on this side which can be dispatched with a Ravager cannon easily.

This time, you can’t ignore the Thunderjaw unfortunately. Use either the central or right rope then immediately head into the canyon and use the Tearblaster on the Disc Launcher on the machine’s side. The Thunderjaw will start attacking you, but it’s best to dodge rather than take it on. As it attacks, the two Ravagers will notice and join in. Once they’re in the canyon too, pick up the Disc Launcher and take them out. It shouldn’t take too long, but the threat of the Thunderjaw makes it trickier. Tie it down with a Ropecaster if you need to.

You cannot complete this Trial (or even start it) if you haven’t completed Cauldron RHO, so you need to do that first. After this, head down the central rope and scan the Ravager from the long grass. With its path highlighted, wait until it’s near enough to override, then let it start fighting the Thunderjaw. It won’t do much damage, but don’t worry about that for now. After this, head across the canyon without being spotted by the Thunderjaw. The overridden Ravager will do a good job of distracting it, so just keep a bit of distance. From here, stay in the long grass and repeat the earlier method for the second Ravager. Even with both of them on your side, you’ll need to step in and finish off the Thunderjaw. Either hit its canisters with fire, tie it down with a Ropecaster, or Tearblaster off the cannons then keep attacking until it falls.