What The Elder Scrolls 6 can learn from The Witcher 3

Sep 21, 2020 This feature was originally published in 2018 and has been lightly re-edited.

The Elder Scrolls VI is set to be one of the biggest RPGs of the next generation. There are still millions of people playing The Elder Scrolls V: Skyrim, so the next game in the fantasy-RPG series would have to stumble spectacularly not to hit the ground running.

Of course, Skyrim is helped along by its release on practically every electronic device ever made, not to mention the many mods that either improve it or make it much sillier than the team at Bethesda intended it to be. Who can forget the mod that turns all the dragons into Thomas the Tank Engine?

But wouldn’t it be great if we don’t need to install mods to sharpen it up when The Elder Scrolls VI release date arrives? Bethesda has a reputation for releasing buggy games and ones that also rely too much on repetition. With that in mind, we decided to give Bethesda a helping hand, looking to the other massive RPG series and seeing what The Elder Scrolls VI could learn from it. 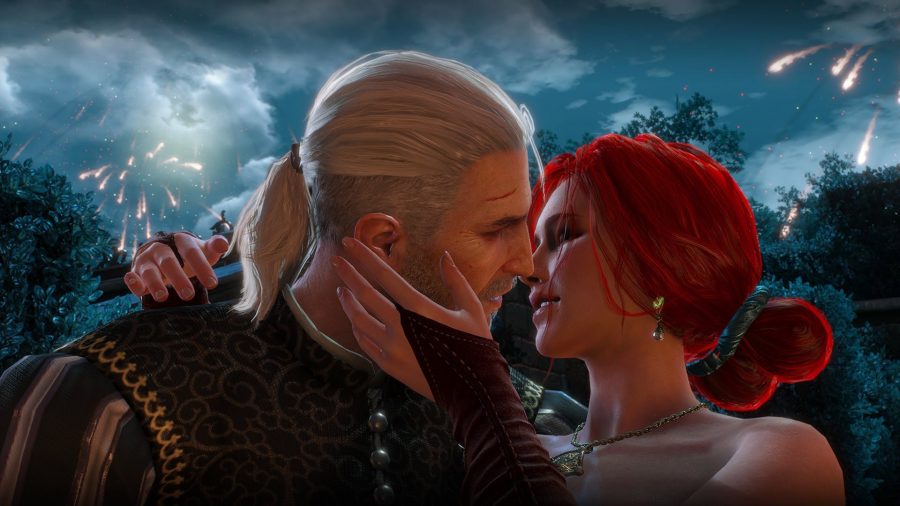 One of the highlights of The Witcher 3 is the intimate relationships you form with its cast. The combination of terrific dialogue and expressive gestures, discussion of complicated emotions, and the drastic consequences of your decisions make the characters feel alive. It helps that you carry a history with Yennefer, Dandelion, and Triss over all three Witcher games, their personalities fully developed into independent people recognisable by their passions, talents, and the mistakes they make.

Characters in Skyrim, however, are often voiced by the same few actors, and those you get closest to are your followers. This includes the likes of Lydia, Uthgerd, and Farkas, who mostly serve as an extra blade or bow at your side, and repeat the same voice lines as if they’re on a timer.

What we’d love to see The Elder Scrolls VI do is give us proper interactions with characters, let us get close and form a bond with them, not just have them carry our items or give us quests. 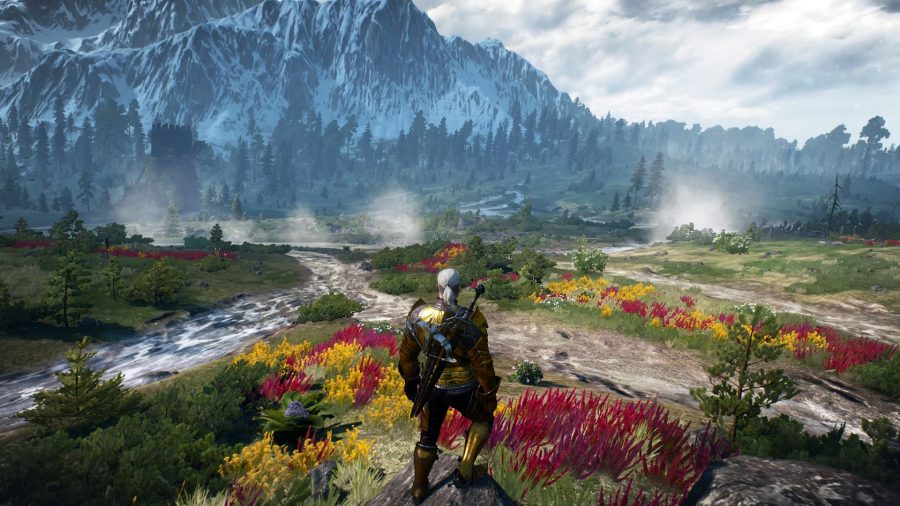 With the exception of Morrowind, the Elder Scrolls series has struggled to supply variation across its locations. Think of Oblivion and you’ll probably imagine stone cities and hilly grasslands. Skyrim is much the same except it’s covered in snow. Even the dungeons repeat the same textures and traps, and you’ll struggle to find a story within them to mix it up, unless that dungeon is tied to a larger quest.

Little matches the eerie power of the smoking wastelands of Velen

The Witcher 3 showed us how an open world can be realised with not only a range of different environments, but unique cultures and stories to find within them. The vast city of Novigrad contrasts with the snowy mountains of Skellige, and little else in the game matches the eerie power of the smoking wastelands of Velen.

Beyond the broad strokes, The Witcher impresses on the micro level too, with each texture and natural formation in the environment made distinctive, from the authentic fields of flowers and rocky outcrops to populated huts and castles. Given that The Elder Scrolls VI will be launching on next-gen consoles that should mean Bethesda has more freedom to provide a world as rich as The Witcher 3’s. 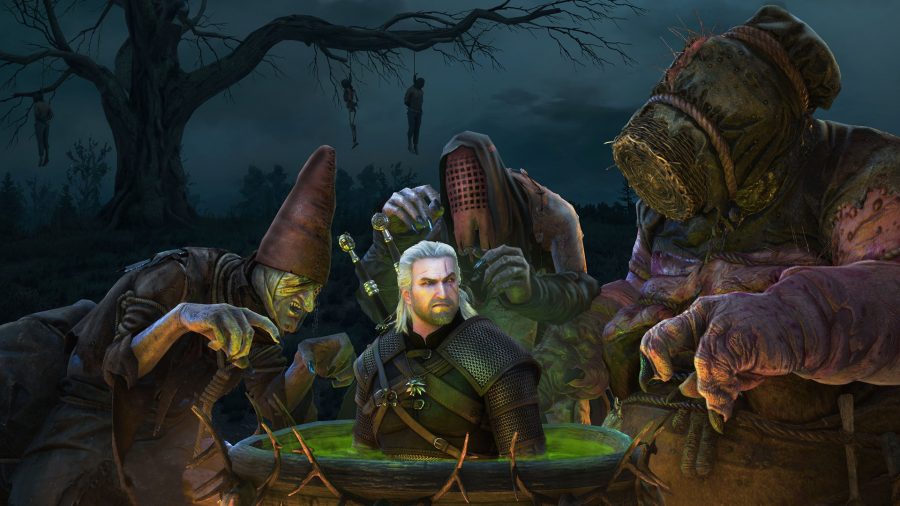 Something as small as a missing frying pan is turned into an entertaining story in The Witcher 3. The reason being that the writers at CD Projekt Red understand that what’s important in an RPG quest isn’t the experience points it gives you but how it enriches the world and even the most minor characters within it. Most important is that you can tell as much thought has been put into the secondary quests in The Witcher 3 as has been put into the main ones.

But, in the Elder Scrolls, the glut of quests means that many of them fall into a dull template. You are often hunting down an item, clearing an area of monsters, or assassinating a character. It doesn’t help that many of the quest locations feel like (or actually are) copy-pasted from elsewhere in the game. The secondary quests in The Elder Scrolls are ‘painting by numbers’ whereas The Witcher 3’s feel literary and gives you new insight into its world. 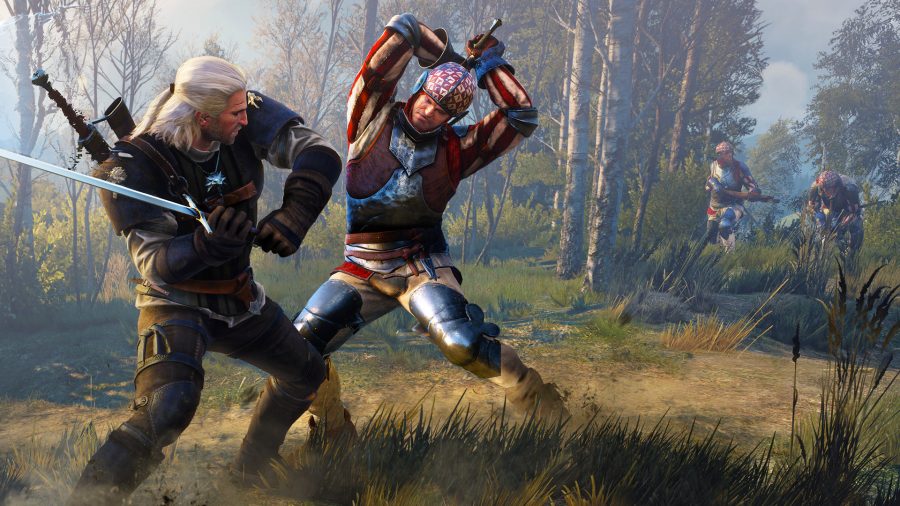 Not everyone likes the combat in The Witcher 3 but there’s no denying the work that has been put into it by CD Projekt Red. Fighting as Geralt or Ciri is refined, with each swing of the sword slicing with finesse, the animations of Geralt dodging his enemies gives a sense of weight and peril to each encounter.

Combat in the Elder Scrolls series has a tendency to feel clumsy. Blades and blunt weapons pass through enemies with little friction and casting magic is displayed as nothing more than a fist opening. Part of this is due to Bethesda having to design everything for first-person and third-person perspectives, which puts limits on the animations.

Step out: The best open-world games on PC

What also doesn’t help is Bethesda’s focus on supplying lots of weapons whereas The Witcher 3 has only a handful of blades for you to worry about. Where you can better customise your loadout is with the magical signs witchers use to create space on the battlefield or ignite enemies. Even the pre-fight preparation helps to vary it up, as you must gather oils for your blades to fight certain beasts, and brew enough potions to help you take on tougher enemies.

The addition of blood splatters, dragon shouts, and slow-mo death scenes in Skyrim were significant improvements to an area the series has struggled with. So, hopefully, The Elder Scrolls VI will have its own share of upgrades. Bethesda should focus on refining the systems and animations, keeping the number of them small in the interest of quality, rather than trying to give as many combat options as possible. 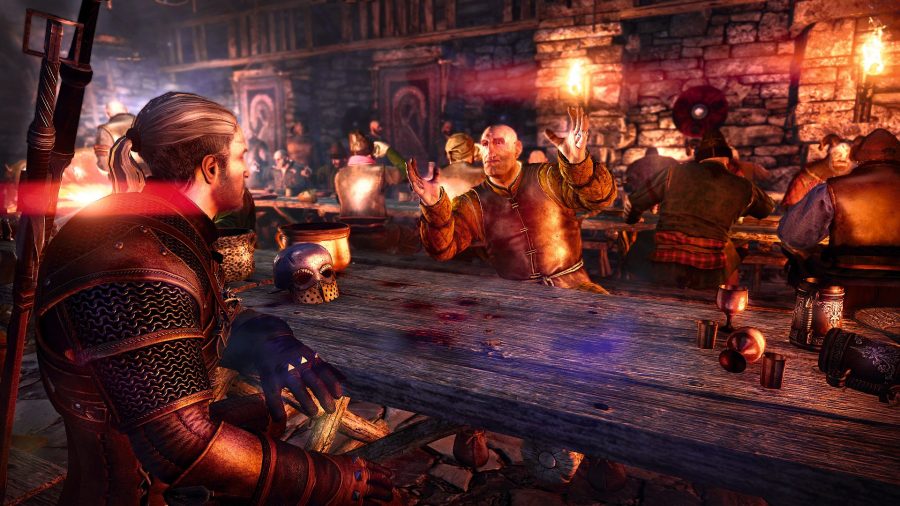 Some of the most popular Skyrim mods add tavern games. Then there are the forums in which people give each other challenges to complete within Skyrim’s world. This makes it pretty obvious that The Elder Scrolls is missing something: minigames.

The Witcher 3’s own minigame, Gwent, has proven popular enough to see it turned into a standalone game. It even has proper tournaments with players competing for thousands of dollars in prizes.